It is undeniable that you have heard of emblematic French fashion house, Dior. What you might not know is that that Dior Gallery located on the famous Avenue Montaigne in Paris has had a makeover since March 9th. Several 3D printed objects currently decorate its main staircase, reproducing thousands of items from the company’s heritage collection. 3D printed by LA FERME 3D©, one of the largest 3D printer parks in France, these objects are exact replicas of famous handbags, shoes, perfume bottles, hats, which have made the house famous, all in different colors. The result is stunning trompe-l’oeil called DIORAMA, which required more than 100,000 hours of printing, 10,000 hours of post-processing and more than 30 printers working day and night for 6 months.

The ALIGHIERI agency is at the origin of this remarkable project. The agency was found by Simon Jaffrot and Noémie Bourgeois who have spent nearly 20 years in the world of art, its museums, exhibitions and the development of works. In 2014, they created a staging of original accessories from the Dior Heritage collection, in the form of color gradients for Dior. This scenography will become a recurrence in all exhibitions of the fashion house, until today. The Dior Gallery project pushed the agency to propose a modulated and reproducible version, impossible to achieve with its traditional working methods. Thus began the 3D printing adventure.

The ALIGHIERI agency approached LA FERME 3D © to understand the feasibility of this project. Given the deadlines and the number of objects to be reproduced, the French company decided last July to multiply its already large number of VOLUMIC 3D printers. As a result, the company now has more than 30 latest-generation machines, capable of working non-stop to ensure high production volumes. In addition to its 3D printers, LA FERME 3D © calls on partners to reach its manufacturing objectives; thus, in December 2021, more than 100 machines were dedicated to the Dior project.

Florent Carasco, Founder of LA FERME 3D ©, explained: “This is one of the most important challenges that the teams of LA FERME 3D © have had to face since the creation of the company, in order to allow the installation of the objects in time in the windows of one of the most beautiful galleries in the world. Thanks to the precision and robustness of the VOLUMIC 3D printers’ mechanics, we were able to develop extreme settings to overclock the equipment and produce the most complex objects at incredible speeds. This winning duo of hardware and expertise is really the key to the success of this giant production.” 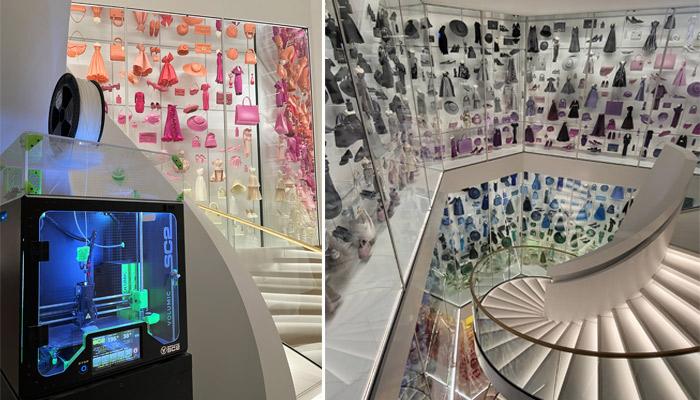 The Dior Gallery project goes far beyond the 3D printing aspect. It was necessary to reproduce identically the collection pieces of the emblematic French haute couture house. The first step was to digitize the objects in the collection using high-performance 3D scanners. Fineness and resolution were paramount: every seam, every detail, every fold had to be carefully captured. This meticulous work was carried out by Florian Moreno of AGP and his teams. LA FERME 3D © then reworked the resulting files to make them compatible with FFF 3D printing.

For more than six months, the VOLUMIC 3D printers were in operation day and night. Ultimately, more than 100,000 hours of printing were recorded, with more than one ton of biosourced material used. Then came the assembly and post-processing stage. The 3D objects were painted and, in some cases, decorated with original jewelry and accessories. This was a long-term project that required the teams at LA FERME 3D © to increase their skills in order to meet the requirements of the ALIGHIERI agency, the DIOR house and the deadlines imposed. In total, more than 10,000 hours of post-processing were required to obtain the final result. 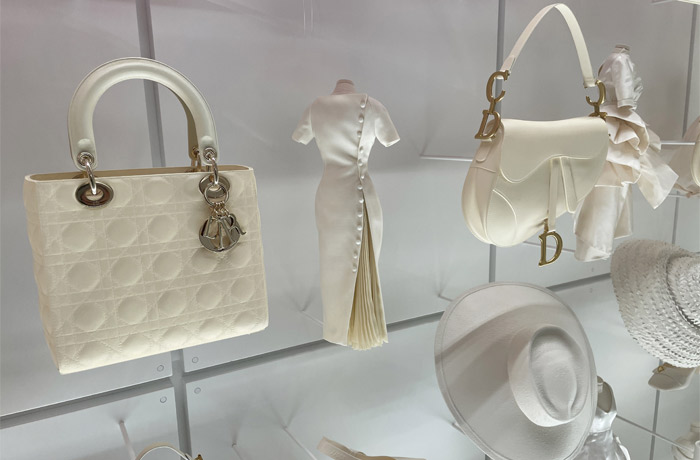 Florent Carasco continued:  “The rise in skill of the post-processing teams was absolutely dazzling, to reach levels far superior to the first prototypes proposed during the permanent exchanges of the summer of 2021 with the ALIGHIERI agency. This reinforced expertise in the sublimation of 3D printed objects is becoming our trademark. An internalized know-how, a skilled workforce, 100% made in France manufacturing and 100% biobased materials, coupled with a tenfold expertise in 3D printing, have really made us grow and push open doors that are still unseen.”

The installation in the Dior Gallery

As the final step of this unique project, the ALIGHIERI agency asked the FERME 3D © to participate in the installation of all these 3D printed replicas at 30 avenue Montaigne in Paris, with their teams and those of Dior. This was a major challenge for the FERME 3D © teams, as they had to meet the deadlines for the official opening of the Gallery, and also ensure the adjustment and calibration of the works. The team dedicated to the installation had to place the objects in a very precise order given the narrowness of the showcases, but also identify in real time any missing pieces in order to pass them on to the team in charge of production. More than 1,800 objects decorate the stairs of the Gallery (photo credits: F. Carasco)

These 3D printed objects are mixed with real miniature haute-couture dresses designed by specialized workshops. The result is harmonious and colorful, giving the DIORAMA its charm and identity. In total, 1,874 pieces were brilliantly installed in the windows surrounding the staircase, including 452 dresses. The famous Miss Dior bottle from 1947 and the famous dress worn by Lady Di at the Met Gala in 1996 are among the items displayed. In any case, this project is living proof of the flexibility of 3D printing and its capabilities!